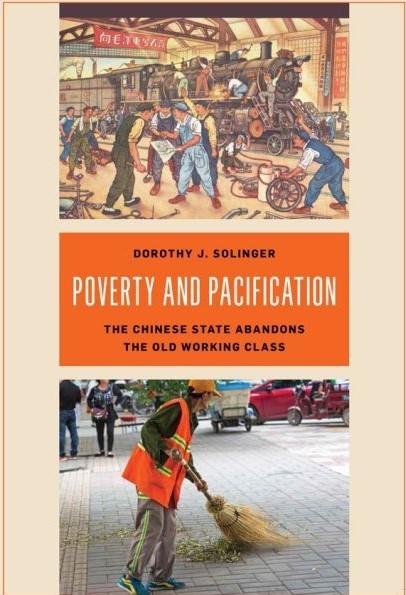 Dorothy J. Solinger’s latest book, Poverty and Pacification: The Chinese State Abandons the Old Working Class (Rowman & Littlefield, 2022), is dedicated to ‘all of those whose lives were wrenched’ in globalising China. Solinger is passionate about working people, including rural migrants and laid-off urban workers, as reflected in her decades-long commitment to activism and scholarship. As Chinese workers—to this day hailed as masters of the nation—were laid off during successive waves of economic restructuring in the 1990s and 2000s, they often found themselves depending on minimum livelihood allowances (最低生活保障, or dibao 低保 for short), desperate to make a decent living in a pitiless job market. With an eye on the new urban poor, Solinger offers a reassessment of China’s quest for wealth and power at the turn of the new millennium.

Dorothy J. Solinger is Professor Emerita of Political Science at the University of California, Irvine. She has authored seven books, including Poverty and Pacification: The State Abandons the Old Working Class (Rowman & Littlefield, 2022), Contesting Citizenship in Urban China: Peasant Migrants, the State, and the Logic of the Market (University of California Press, 1999), and States’ Gains, Labor’s Losses: China, France, and Mexico Choose Global Liaisons, 1980–2000 (Cornell University Press, 2009), and edited or co-edited six other books, including Polarized Cities: Portraits of Rich and Poor in Urban China (Rowman & Littlefield, 2019).

Jenny Chan is Associate Professor of Sociology at the Hong Kong Polytechnic University. She is the co-author, with Mark Selden and Pun Ngai, of Dying for an iPhone: Apple, Foxconn, and the Lives of China’s Workers (Haymarket Books and Pluto Press, 2020; translated into Korean by Narumbooks, 2021). She also serves as Vice-President (2018–present) of the International Sociological Association’s Research Committee on Labour Movements. Her current research on informal employment and logistics labour platforms is funded by the Chiang Ching-kuo Foundation and the East and Inner Asia Council of the Association for Asian Studies.

See the full text online on the Made in China website